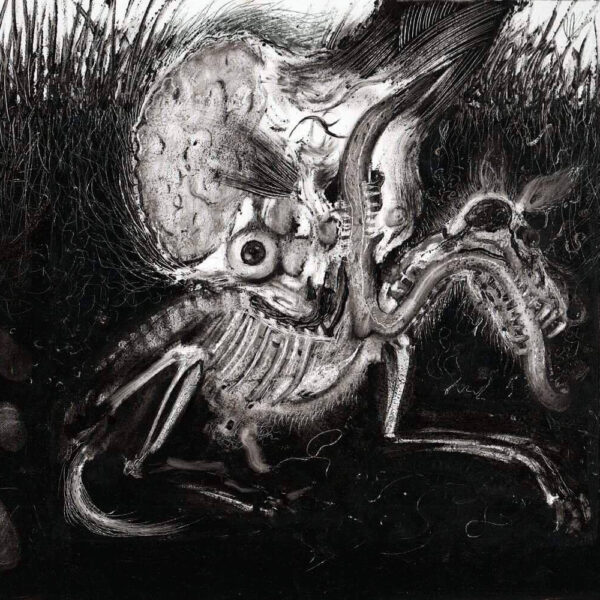 We proudly present our next release, SHR046 TOTAL VOMIT EXPERIENCE & FESTERDAY Split single. 2 totally new tracks from each band: Mask & Echo Chamber by TVE, and A Tree of Poison & Faeces by FESTERDAY. This split single will be released as a digital release during this summer, and later on this fall as a 7″ vinyl single. More product info coming soon.

What became Total Vomit Experience was formed around 2005. The aim was to play the kind of grindcore we listened to as kids, Napalm Death, Carcass, Extreme Noise Terror etc. Initially we played as a threepiece, Aki on bass and vocals, Tuomas on guitar and Lauri on drums. We recorded a couple of demos by ourselves, played a few local gigs. We had two guitarists for a while, first Juha and after he left, Timo joined. After a while Aki decided to focus on vocals and we recruited Antti for bass duties. Some time later Timo left to concentrate on Magenta Harvest. We decided to forge on with one guitarist, because who the hell needs something like guitar harmonies in grindcore anyway?

We released a split 7″ with Kashmar in 2012 with additional vocals and screeches provided by Vesa. A DIY video for the song Respect was released in 2015. In 2016 Aki left the band. We recruited Temsu from H‰vitys to vocal duties.

Festerday was formed in Pietarsaari (Jakestown), Finland, approximately 1989 when four 13–14-year-old guys (Timo Kontio, Kena Strömsholm, Miikka Timonen and Jallu Honkaniemi) met at the local youth center and realized that they all shared the same interests within the underground scene. The members had already been involved in some band activities before they got together but the musical outcome of those bands did not exactly turn out as planned.

The underground scene offered something out of the ordinary to the youngsters. Tape trading and fanzines drove them deeper into the scene, and after a couple of months the four guys were jamming in the local youth center’s facilities doing covers of punk, thrash and death metal songs.

At that point the band had no name, but the name Mortuary played its role for a short time before changing it to Festerday. The name was taken from a Carcass song and that pretty much underlined the direction where the band was going.

Having only one guitarist in the band had its downsides, and therefore Teemu Saari was asked to join the ranks. Teemu and Timo had back in the days been “riffing up” some tunes together, so getting Teemu onboard seemed like an obvious decision.

The first stable line-up of the group consisted of Timo on guitar, Kena on vocals, Miikka on drums and Jallu on bass, and later also Teemu. From 1989 to 1991 the members also recorded demos and played gigs under different monickers: Headache, Jungle Yuppies, Extreme Disco Terror, Kaasukammio. After playing some local gigs with Festerday, Jallu and Miikka left the band in 1991 to form their own punk/HC band, Ödeema.

Finding new suitable candidates for Festerday seemed at that point impossible. Luckily the band met the guys from Carnifex and hooked-up with the drummer Pentele, who eventually turned out to be more than just a helping hand. After only a few rehearsals, and still without a bass player, the band decided to record the first demo. The band was not pleased with the outcome and decided not to release the demo. Pentele had to focus on Carnifex, but recommended Teemu Kilponen from the death/thrash band Masacre. Kilponen on the other hand knew a guy with magic fingers and introduced Jakke Mäki (RIP) to the band.

Now, with Kilponen on drums and Jakke on bass, the second stable line-up was set in 1992 and the demo II was recorded as a split release with Carnifex.

As the line-up finally seemed stable, the band was still missing an official logo. The right guy for the job was the French artist, Christophe Moyen, who already had a name in the underground scene and was well-known for his artwork. Moyen came up with the first official logo, the “Christ Rotting on the Cross” demo cover and a couple of flyers.

However, the split was never officially released, but got some attention in fanzines throughout the underground via tape trading and small radio shows. The third demo was recorded the same year, but just like the previous demos, it was never officially released. The demos were simply named I, II and III. Labels like Wild Rags, Peaceville, Drowned among others showed interest in the band, but somehow the ink just did not stick to the paper.

After the third demo Festerday started to stretch the musical limits a bit further and a 25 minute long song with lyrics in four languages was rehearsed, but never studio recorded. Shortly after the band entered a period of hiatus from the end of 1993 onwards and soon after the members went separate ways to form new bands. The members were active in a bunch of different bands between 1994–2013 before they decided to complete the project that once was left undone – and to pay homage to the former bassist, Jarkko, who suddenly committed suicide after finalizing the album with Painflow in 1999.

In 2014 the band started to rehearse the 25 year old songs. At this point Antti Räisälä from Total Vomit Experience joined in on bass as a full member and plans for an album started to take form. Later the same year the Finnish label, Svart records, showed interest in the band, and this time the ink did dry on paper.